The history of sponsorship – part 2 In the first part of our series on the history of sponsorship, we learned that modern sponsorship was born as a form of patronage, when partnering relationships were based on an exchange of economic benefits.

A common practice among wealthy families who wanted to support the arts and sciences, sponsorship was also a tool used by affluent citizens to extend their influence in society. In this article, we’ll take a look at how the dawn of the industrial revolution cemented the foundations of sponsorship as we know it today.

Beginning in ancient Greece (5th century BC), various forms of partnerships emerged that allowed patrons and brands to publicize their message. The practice of endorsement—being associated with a public figure to promote a brand, a product or an advertising message—has been around since the 17th century. Its earliest occurrence can be traced back to the 1760s, when the pottery and porcelain manufacturer Wedgwood received the backing of the Queen of England to create a new and unique set of cream-colored earthenware. The company used this commercial relationship strategically to promote its brand and enhance its reputation.[1]

A century later in Australia, the catering firm Spiers & Pond was looking for a way to raise its visibility on the streets of Melbourne. As the sport of cricket was hugely popular at the time, drawing large crowds to every match, the company decided to take advantage of the public’s enthusiasm for the game by inviting England’s national team (the All-England Eleven) on an all-expenses paid tour of Australia. Each player was paid US$210, plus travel costs. Spiers & Pond shelled out a total of US$15,000 for the commercial partnership (US$2,200,000 in today’s value). The entrepreneurial duo at the head of the company capitalized on the fortune and notoriety generated by this partnership venture to relocate their business to England.[2]
In 1864, the famous cricketer John Wisden founded the eponymous Wisden Cricketers’ Almanack, which covered the sport in the United Kingdom. It has been published every year since, and the magazine still bears his name today.[3] 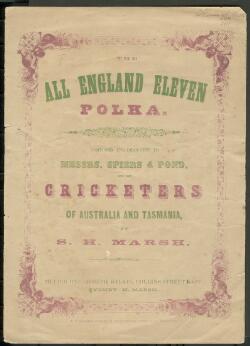 A new tool used by brands to attract customers appeared at the end of the 17th century. Trade cards were distributed to customers or inserted into product packaging. They served both as advertising, allowing customers to promote a business to their entourage, and as maps, directing customers to store locations in large cities. The use of trade cards spread from Europe throughout the world and, from 1875, began to be widely adopted in the United States. In addition to a short description of the business, the cards often featured illustrations of well-known figures like Lili Landree, Sarah Bernhardt and Mark Twain, who lent his name to several products, including cigars and flour. The tobacco industry in particular made use of this tool in the form of a specific type of card commonly known as a “cigarette card.” During the same period, many companies recognized the value of leveraging the reputation of sports teams or athletes by creating partnerships with them. Among the oldest partnerships of this kind is the association between Michelin and Charles Terront, which was established during the Paris-Brest-Paris race in 1891.[4] When the first modern Olympic Games were held in 1896, the visibility of partners, including Kodak and Coca-Cola, was limited to advertisements in the programs.[5] The latter entered into what would become a 104-year partnership with the Olympic Movement in 1928, establishing Coca-Cola as a figurehead of the Olympic Games.[6] The turn of the 20th century marked a boom in the sponsorship industry thanks to a steady growth in partnerships coupled with the introduction of naming rights. Typically, companies would sponsor public venues with the goal of raising their profile, enhancing their brand image and ultimately improving their business results. This type of partnership was seen as a statement of prestige that would strengthen the brand’s dominant position in strategic markets and provide it with a strong foundation.

In 1902, Slazenger entered into a partnership with Wimbledon that continues to this day. Ten years later, during the Stockholm Olympics, the Granberg Industrial Art Company paid $3,600 ($100,000 in today’s dollars) for the right to take and sell photographs.[7] Other brands also saw in the Games a unique opportunity, including Coca-Cola, which in 1928 acquired the commercial rights to the Amsterdam Olympic Games.[8] In 1903, two Bayer employees asked the company’s management for permission to build a gym where they could practice sports. A few months later, the Bayer Sports Club opened its doors. In 1906, the staff formed the first ever soccer team and, for the occasion, created a team jersey emblazoned with the company’s logo. Today, 110 years later, the club still goes by the name Bayer Leverkusen, and the jersey still features the red lion. It is the oldest partnership that still exists today.

In 1912, in the United States, the Boston Red Sox stadium pioneered the concept of stadium naming rights. Traditionally, the naming of venues has been based on patronage, which generally showcased the names of donors. However, the Taylor family, who owned the Red Sox at the time, preferred to give name recognition to their real estate company, the Fenway Realty Company.

Following this trend, Charles Wheegman purchased the naming rights to the Wheegman Park baseball stadium in 1914. Along with Fenway Park, opened in 1912, it remains one of the oldest baseball stadiums in the Federal League still in operation.

After their takeover by Wheegman, the Chicago Cubs, who up until then had played all their games at West Side Park, moved to Wheegman Park in 1916. In 1920, the stadium briefly underwent a name change to reflect that of its parent team and became known as Cubs Park. Finally, in 1922, chewing gum manufacturer William Wrigley purchased the baseball team and the stadium, and proceeded with extensive renovations. In 1926, the stadium was renamed Wrigley Field, and it still bears that name today. Years of renovations and expansions followed, increasing its capacity from 14,000 (1916) to 41,160 (2007). In 2020, the stadium was designated a National Historic Landmark, affirming its rich history and significance to the city of Chicago.

At the same time, brands continued to sign endorsement contracts, primarily with sports personalities, until the 1930s. Starting in 1945, with the advent of television, the endorsement business took off, extending its reach to film and TV celebrities.

The late 1960s marked the dawn of television for mass audiences, culminating in the broadcast of a momentous historical event on July 21, 1969: the live broadcast of the first steps on the Moon, watched by more than 600 million viewers worldwide. By the late 1960’s, commercials were a television staple. Their primary objective was ”to turn advertising into a tool for modernizing the economy […] and developing consumption, coinciding with the opening of the first supermarkets.”

With all the potential it offered, television was becoming the medium of choice for brands to promote their products. Advertising opportunities and the ability to reach a wider audience were among the most important factors in the evolution of sponsorship. Every industry, in particular the tobacco, alcohol and automotive companies, reaped the benefits. The popularity of sports makes it a highly attractive television commodity, and with increasingly more airtime being granted to sporting events, interest in sports as a tool for brand promotion continues to grow.

Initially, TV spots were integrated into the sports program time slot, providing placement opportunities before, during and after an event. Advertisers subsequently jumped at the chance to feature endorsed personalities alongside their brands, which had never been done before.

One of the first TV commercials was a spot for the Bulova Watch Co., which aired in 1941 during a baseball game between the Brooklyn Dodgers and the Philadelphia Eagles. The ad cost $9 at the time, or about $150 today.

In 1965, advertising ramped up once again with the introduction of colour television. By 1975, it was reported that one in eight ads used celebrity endorsements as a branding strategy. Research conducted by Boston University that looked at 1,000 commercials produced and aired between 1920 and 1970 revealed that the brands that most endorsed athletes and actors were tobacco, cosmetics, beverage and audio equipment companies.

At the same time, televised events offered sponsors unique opportunities to maximize their on-air visibility without having to fork out for broadcasters’ advertising rates. Sponsorship as a communications tool was becoming increasingly democratized, with the emergence of new practices such as team sponsorship, which provided advertising opportunities and the possibility of displaying logos on the players’ equipment—ultimately generating free television exposure.

Television unquestionably played a key role in the development of advertising and sponsorship, with the 1980s proving to be the golden age of the small screen, as major partnerships were established between the sports industry and tobacco companies, who had to find creative ways to circumvent the laws and restrictions that were gradually being imposed on the international scene.