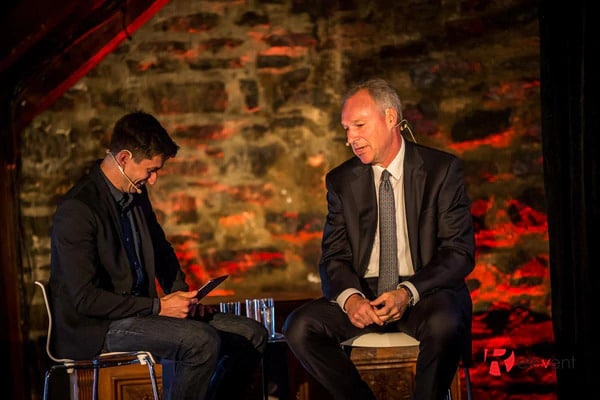 The terms “pioneer” and “trailblazer” come to mind when describing Tom Moser’s career in the entertainment/sports sponsorship marketing field. Moser, a mastermind marketer for British American Tobacco, including its Canadian subsidiary Imperial Tobacco Company Canada has run the gamut in high profile tobacco sponsorships; from IndyCar racing to jazz festivals and of course, Formula One.

Moser was raised in an Amish community and his father had 15 siblings. He started working as a salesman at Imperial Tobacco in Kitchener, Ontario in 1980. He is married to Nathaly Thibault whom have two adopted children from Russia, Sacha and Louba.

Due to tobacco legislation restricting more traditional forms of advertising and promotion; sponsorships became one of the only communications vehicles for marketers at tobacco companies. “It was actually a benefit in some ways,” says Moser as he describes those transformative years. “When you have a lot of alternatives, you spend a lot of time choosing between alternatives, also in terms of measurement, you’re not really deep in anything.”

According to Moser, it was important to be narrow and deep in sponsorships. When legislations started to change the way tobacco companies marketed, it forced them to be more intelligent and precise. This focus resulted in Moser having to understand how sponsorships could be deployed to impact consumer behaviour resulting in market share and revenue.

Moser and the brands he represented were very visible in sports and entertainment circles. “PGA, LPGA, ATP, Show jumping, Jazz Festivals in Montreal, Vancouver, and Toronto, you name it; we were big in sponsorship,” Tom says.

“At that time, if you defined the objective of sponsorship you would still hear that the objective was to return something to the community in which we live and work. It was weak in understanding the true impact,” recalls Moser of those early years in the 80s.

During that period sponsors used “outputs” data where brands would look at measured media and presence, however there was not an absolute link or measure on how sponsorship changed consumer behaviour. “At that period of time there was a lot of softness,” says Moser.

The 90’s brought about the most dramatic changes for tobacco sponsorships. It was during this period of time that Moser was transferred to Montreal. The market had undergone a complete transformation and government legislation banned tobacco companies from direct sponsorship. The tobacco industry reinvented itself, and the way they had to market their business and brands. Moser’s mandate included creating third party brands which would be geared towards sponsorship initiatives. Companies like Players Ltd. and DuMaurier Ltd. were born with the mission of entering the sponsorship arena. Imperial also created or bought activation agencies.

The company also acquired events such as the Grand Prix of Trois Rivieres, an event which was previously sponsored by the Players brand.

It is during this period of rebirth where the term trailblazer is most appropriate for someone like Moser. Acquiring properties and branding them as their own was a revolutionary concept in the world of entertainment/sports marketing. This was the Red Bull model before Red Bull was doing it.

The costs decreased dramatically because they were running these events as businesses and also activating for their respective brands, and for the broader spectrum of sponsors involved in the property they now owned.

This concept paved the way towards the global stage in sports marketing; Formula One.

Tom Moser was the architect behind one of the most ambitious projects in modern day Formula One, the creation of the British American Racing F1 Team. The concept was revolutionary and in line with what the tobacco industry was creating in a hybrid concept where the property and sponsor was one. “We didn’t win any popularity contest with the property, that’s for sure!” exclaims Moser as he looks back at the trials and tribulations behind the BAR team.

British American Tobacco purchased the Tyrrell Team, dismantled the outfit and revamped its operations under the BAR moniker. At the same time BAT also acquired 50% of the global television rights to Formula One including emerging markets such as India, China, Indonesia, and Malaysia.

Another ground-breaking effort by BAT in Formula One was the dual branding of both Lucky Strike cigarettes and 555 cigarettes. The plan was to have two different car liveries, but a lost court battle killed the idea of having two different vehicles competing for the same team. The end result was another ground-breaking effort by Moser; a split livery with a zipper running along the center of the car, separating both branded sides; half Lucky Strike, half 555! This was hailed as a genius attempt by Moser to feature both brands in motorsport’s top division.

“Do something a little bit differently, try to break the mold, take a risk somewhere.” These are the words Tom Moser left behind at the 2015 Relevent Conference in Montreal last fall.

It is interesting to look at Moser’s career and life and wonder how brilliant minds work within their spheres, and in many cases transform the very environments they are in. It is safe to say that Moser is one of the most unconventional sponsorship marketers in the world. All this from a farm boy, from the most conventional of places.